Sesame seeds are derived from an unremarkable plant of the Sesamum genus and bears the scientific name of Sesamum indicum. Sesame seeds are considered the oldest oil seed crop in the world, and have been cultivated for more than 3,500 years. Evidence of their native forms are both in Africa and in India, places where they are still widely cultivated. It is extremely resilient, and grows in places where many other crops fail, which is why it was so heavily relied on throughout the ages.

Although it is a seed, it can still bother people with nut allergies, and it has a distinctly nutty flavor. Many of the health benefits are derived from the oils, which are found in higher concentrations in sesame seeds that in any other oilseed crop in the world. The sesame plant is no more than 3 feet tall, and the seeds are released from small pods along the plants’ axes.

The seeds themselves are very small, only 3-4 mm long and 2 mm wide, yet 3.85 million metric tonnes are produced every year! The seeds comes in a wide variety of colors, depending on the variety or strain of the sesame plant. The seeds can be purchased either shelled or unshelled. They are commonly added to salads, as an ingredient or topping for bread and grain products, crackers, sushi, cakes, soups, breading for fish and meat, and a wide variety of other applications. You can find sesame seeds in almost every cultural cuisine in some way. This wide spread is due to its availability, health benefits, and pleasant flavor.

The many health benefits of sesame seeds are due to its nutritional content, including vitamins, minerals, natural oils, and organic compounds which consist of calcium, iron, magnesium, phosphorous, manganese, copper, zinc, fiber, thiamin, vitamin B6, folate, protein, and tryptophan. The wide range of health benefits are explained in greater detail below.

Blood Pressure: The natural oils of sesame seeds have been connected to a reduction in hypertension in a number of research studies, which reduces the strain on your cardiovascular system, and helps prevent various cardiac conditions. Furthermore, magnesium has long been known as a vasodilator (an agent that reduces blood pressure) and sesame seeds are packed with this essential mineral, containing up to 25% of your daily requirement in a single serving. 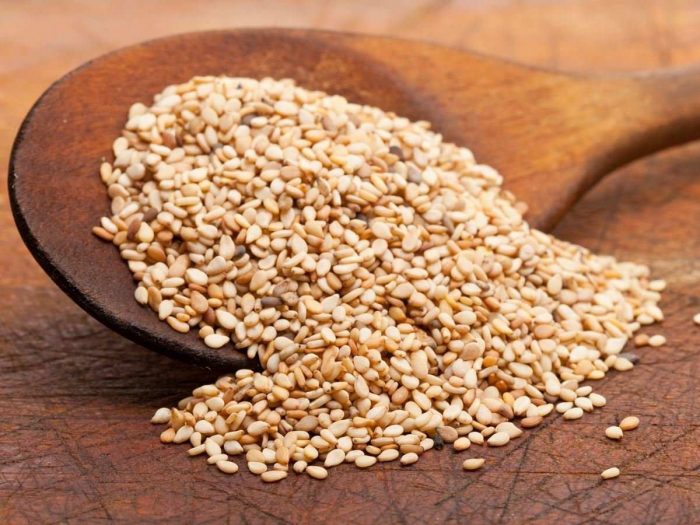 Cancer Prevention: With the wide range of essential vitamins and minerals contained in sesame seeds, it is no surprise that it has been linked to a reduction in the risk of cancer. Beyond the role of these more common minerals, including the powerful anti-carcinogenic effects of magnesium, sesame seeds also contain phytate, an uncommon cancer preventing compound that functions as an antioxidant and reduces the impact and effects of free radicals, the dangerous byproducts of cellular metabolism that have been connected to many forms of cancer and various other conditions like heart diseases, premature aging, and cognitive malfunctions. Specific cancer prevention that sesame seeds have been linked to include leukemia, breast, lung, pancreatic, colon, and prostate cancers.

Diabetes Management: The components of sesame seeds, including the vital magnesium, have been connected to reducing the chances of diabetes and managing the symptoms in patients having already developed the condition. Furthermore, it has been shown that sesame seed oil can positively effect the impact of various diabetic medications like glibenclamide in patients suffering from Type 2 diabetes. It improves this oral medication’s functionality and further regulates the insulin and glucose levels in the body, thereby helping to manage the symptoms of diabetes.

Bone Health:  The impressive levels of essential minerals like zinc, calcium, and phosphorous that are found in sesame seeds can be a major boost for your body’s bone health. These minerals are integral parts in creating new bone matter, and strengthening/repairing bones that may be weakened by injury or the onset of debilitating bone conditions like osteoporosis.

Digestion: These little seeds pack a significant amount of fiber inside of them, like many other seeds and nuts. Fiber is an important element in healthy digestion, as it bulks up bowel movements and helps them move through the digestive tract, as well as stimulating peristaltic motion as food moves through the smooth intestine. This can reduce conditions like constipation, as well as diarrhea, while simultaneously protecting the health of your colon and reducing the chances of gastrointestinal diseases and cancer. Fiber also works for your heart, by scraping out dangerous LDL cholesterol from arteries and blood vessels, thereby protecting against atherosclerosis, heart attacks, and strokes.

Anti-Inflammatory Qualities: The high content of copper in sesame seeds has a number of valuable functions, including the reduction of inflammation in joints, bones, and muscles, thereby reducing the associated pain of arthritis. Furthermore, copper is an essential mineral for strengthening blood vessel walls, bones, and joints. Finally, copper is necessary for the proper uptake of iron, a key component of hemoglobin. Therefore, proper copper content in the body maximizes circulation and ensures that the organ systems of the entire body receive enough oxygen to function properly.

Radiation Protection: One of the unusual organic compounds in sesame seeds is called sesamol, and it has been associated with protecting DNA from the harmful effects of radiation. This radiation could come from accidental sources, or from the treatment of cancer with chemotherapy and radiotherapy. By protecting DNA from mutation due to radiation, sesame seeds can boost strength and reduce the chances of contracting other forms of cancer due to cellular mutation.

Oral Health: Perhaps the most notable effects of sesame seeds are its powerful effects on oral health. The process called oil pulling, in which certain amounts of sesame seed oil is swished around the mouth, can have a strong antibacterial and astringent effect on all aspects of oral health. It is also closely associated with reducing the presence of the Streptococcus bacteria, a common bacteria that can wreak havoc on your oral cavities and other parts of your body.

Skin and Hair Health: As mentioned, sesame seeds contain high levels of zinc, a vital component in the formation of collagen, which strengthens muscle tissue, hair, and skin. Also, sesame seed oil has been shown to reduce the appearance of burns and marks on the skin, as well as reducing the signs of premature aging.

Metabolic Function: Sesame seeds contain high amounts of protein, which is broken down and reassembled from its component parts into usable proteins for the human body. This adds to overall strength, healthy cellular growth, mobility, energy levels and metabolic function.

Words of Cautin: Excessive consumption of sesame seeds can cause irritation in the stomach and colon. They can also show up on drug tests due to their small amount of THC. However, both of these things occur when it is consumed in very large amounts.

Where do sesame seeds come from?

Sesame seeds come from the sesame plant, which is native to parts of Asia and East Africa. There are many varieties of sesame seeds, and they remain one of the most widespread and popular seeds in the world. The seeds are initially in a black hull inside a pod, so once those seeds are removed, they must be hulled, stripped of their shell, so they can be added to your hamburger bun!

Sesame seeds are not nuts, although many people treat them the same way. There is a reason for this occasional fear of sesame seeds, since many of the same allergenic chemicals and proteins found in nuts are also in sesame seeds. Therefore, if you are allergic to some types of nuts, it would be wise to speak to your allergist about sesame seeds. However, scientifically speaking, sesame seeds are just seeds!

Sesame is the name for both a plant and the seeds of that plant, which we come across in culinary preparations around the world, as well as certain natural health practices. Sesame, as a word, is derived from the Latin sesamum or Arabic semsem. Both of these words provide roots for things meaning “oil” or “liquid fat”. Sesame oil and seeds are highly sought after around the world for their nutrients and components.

How to roast sesame seeds?

You can roast or toast sesame seeds very easily, simply by spreading the seeds out in a pan (no more than 1 cup at a time) and move the pan continuously, ensuring that seeds keep moving and don’t burn. You want a nice even brown color on the seeds, not black, and if you start to smell an acrid or strong smell, they’ve begun to burn. You can also set them on a baking sheet and cook them at 350 degrees for about 10-12 minutes.

Sesame seeds are very healthy, which is one of the reasons they are so popular in culinary preparations. Sesame seeds are packed with unique organic compounds, such as sesamolin, as well as minerals like copper, calcium, iron and manganese, as well as vitamins and fiber. Sesame seeds may be small, but they pack a major health punch, and can help with everything from digestion and circulation to bone strength and inflammation.

Where to buy sesame seeds?

How to eat black sesame seeds?

You should soak the black sesame seeds in water overnight to make them more easily digestible, and you can then sprinkle them on your salads, in your yogurt, or even blended in a smoothie. They are rich in B vitamins and iron, as well as calcium and zinc.

What are sesame seeds good for?

Sesame seeds are particularly good for optimizing digestion. The fiber they contain can help to ease constipation and improve your nutrient retention. Sesame seeds can help to improve blood pressure, build strong bones and protect the immune system. For oral health, sesame seeds are excellent, and are commonly eaten as a digestive. Finally, they can even detoxify the body and lead to lower stress levels.

How many calories in sesame seeds?

There is a surprisingly high number of calories in sesame seeds – approximately 50 calories in a single tablespoon. However, this is due to the concentrated nature of these seeds, which are overflowing with minerals, vitamins and organic compounds that the body needs. While eating an excessive amount of sesame seeds isn’t suggested, using them sparingly in your meals and adding them to your diet when possible is a very good idea.

How to use sesame seeds?

Sesame seeds can be used in a variety of ways, either added as a sprinkled topping on salads or stews, mixed into bread, ground into a thin paste like hummus, or even blended into a powder and mixed with various smoothies. Sesame oil is also very popular and potent for natural health remedies, ranging from topical applications on the body to using the oil as a digestive or anti-inflammatory substance.

Organic sesame Seed is available to purchase at SFMart.com

This article is originally posted on Organic Facts